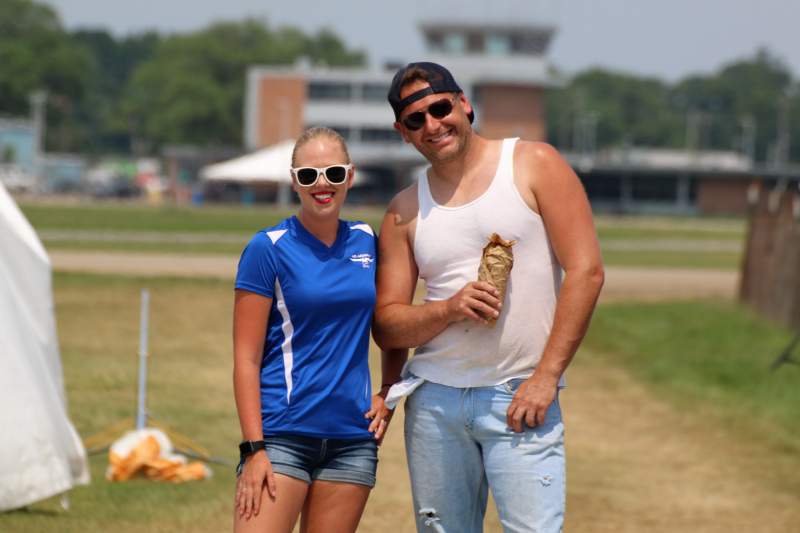 Kyle Franklin is a third-generation pilot and has been performing professionally in Airshows for over 25 years. Son of the late Jimmy Franklin, Kyle was born into the airshow industry. Learning to fly at the age of 8 and performing his first wingwalk at age 14. Kyle started performing professionally as a wingwalker and stuntman at age 17 and became the world’s first Jet Wingwalker at 18. A few years later he started flying his Ben Whabnoski Comedy Act in the Piper Super Cub, he learn to fly in, an act that is still a fan favorite today.

In 2016 Kyle and Liz met at EAA AirVenture, where they would cross paths again a year later. Kyle and Liz fell in love when she came to visit Kyle’s airport for tail wheel instruction and they have been married since 2019. Ever since Liz has become an essential part in the family’s flying business. Most notably her part as the pilot that Kyle steals the airplane from, in his comedy act.

Over Kyle’s career he has created and performed over 12 different airshow acts in 6 different aircraft including, wingwalking, solo aerobatics, comedy acts, motorcycle to airplane transfers, stunt driving, ariel dogfight routines and many more. Kyle Franklin (Ben Whabnoski) has become known as the “King of themed air show acts” and a legend in the airshow world. He has been flying airshows full time for over 25 years, and has won the coveted Bill Barber Award for Showmanship. Kyle continues to reinvent himself to bring something new to the airshow industry and to keep up with ever changing pop culture.

The name Franklin has always been the name for unique and different airshow entertainment for over 55 years. Always focused on entertaining, always striving for perfection in their flying and ideas, they never wanted to be known merely as pilots. The Franklins have always delivered a legendary mix of flying, showmanship and entertainment.